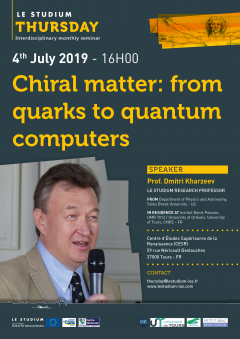 Chirality is a ubiquitous concept in modern science, from particle physics to biology.

In quantum physics, chirality has a dramatic effect on the macroscopic behavior of fluids with chiral fermions.

This observation may open a path towards a new generation of quantum computers.

FROM: Department of Physics and Astronomy, Stony Brook University - US