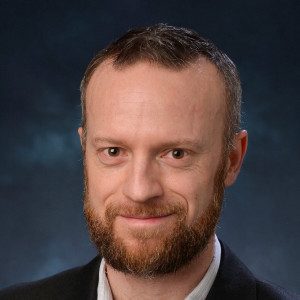 Bob Marshall received his PhD in Electrical Engineering from Stanford University in 2009. He is now an Associate Professor in the Aerospace Engineering Sciences department at the University of Colorado Boulder, where he leads the Lightning, Atmosphere, Ionosphere and
Radiation Belts (LAIR) research group. His current research interests include lightning and its effects in space; meteors; and coupling between the radiation belts and the upper atmosphere. His group designs and builds custom scientific instrumentation, collects and analyzes data, and conducts numerical modeling, aiming for a complete scientific approach to space physics investigations. He is currently leading the development of three CubeSat missions that will make complementary observations of the space environment from Low-Earth Orbit.

The Earth’s radiation belts are regions of trapped radiation in the form of energetic electrons and protons. They affect almost every satellite orbiting the Earth, and they also directly connect to Earth’s atmosphere, affecting our environment down to aviation altitudes. However, this region remains poorly understood and very difficult to forecast. The proposed project will utilize the expertise of Dr. Robert Marshall and collaborators at LPC2E to improve our understanding of the radiation environment and its impact on the Earth’s atmosphere. The project will primarily take advantage of a new CubeSat mission known as CANVAS that will launch near the start of this project. Dr. Marshall is the PI of the CANVAS mission, and LPC2E has participated by contributing key sensor technology. This project has five key goals related to the CANVAS mission and future missions to study the radiation environment in space. First, we will begin analysis of CANVAS science data towards the primary CANVAS mission goals. Second, we will collaborate to develop new analysis methods and tools to increase the science output from CANVAS. Third, to enhance CANVAS science return, we will establish ground-based VLF receivers in France and other locations in Europe, to provide complementary observations. Fourth, to build a future of radiation observations and improve future measurements, we will use insights from CANVAS to develop future mission concepts. Finally, in order to benefit future science missions led by LPC2E and CNRS, I will use my expertise in CubeSats to contribute to the development of future mission concepts at LPC2E. All of these tasks will contribute to the growth of long-term collaboration with LPC2E for future missions and scientific study.