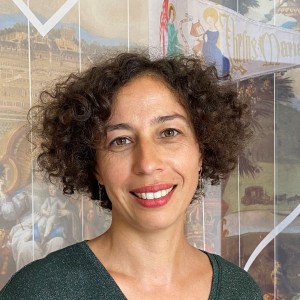 Associate Professor of French at the University of Virginia and Andrew W. Mellon Faculty (Institute of the Humanities and Global Cultures). Her main research areas in Comparative Literature include: Multilingualism, Postcolonial Literatures, Literary Theory, Theory of the Subject, Historiography and Cultural Theory. https://french.as.virginia.edu/people/profile/fmb5s

After graduating in Comparative Literature from University of Limoges, Maya Boutaghou who was born and educated in Algiers until 1994, received in 2008 an Andrew W. Mellon Postdoctoral Fellowship in the Humanities at UCLA in the center for “Cultures in transnational perspective” directed by two major leaders in the field of Comparative Literature and Postcolonial Studies, Professor Françoise Lionnet and Professor Shu-mei Shih. Her long-term grounded research at the intersection between identity construction, history and poetics of the novel in 19th century informs her most recent work on decolonial forms of historiographies in North Africa. Trained in both French and Arabic, she applies a complex approach to cultural theory to avoid binary interpretations of postcolonial issues through the study of aesthetic phenomena.

Interdisciplinary forms of historical writings in colonial and postcolonial contexts

One major orientation of my research in the four coming years will be dedicated to alternative forms of historical writings particularly in contexts with a problematic access to historical archives and to archival material in general. This current project addresses new ways of rewriting cultural history from a decolonial perspective without erasing previous narratives but trying to enlighten them and read them with decolonial lenses.

Another dimension reflects on historical representations of urban spaces through comparative lenses using photographs, maps and literary discourse. An illustration could be found in Eugène Fromentin’s Une année dans le Sahel (1859), his accounts render the urban historiography of Algiers and its colonial transformation. In the Summer of 2022, I was invited by the Academy of Global Humanities and Critical Theory to give a week-long series of graduate seminars at the Summer School of Global Studies and Critical Theory held at University of Bologna. I plan to develop this course on literary accounts of urban planning. I will compare colonial cities in their configuration and representations in time. How did the transformation of urban planning affect urban cultures in the Mediterranean, in the Caribbean and in the Indian Ocean? Of course, this dimension can be either limited to the French Empire with a textual and spatial analysis of the development of Algiers, Tunis, Cairo, Fort-de-France, Port-Louis or it can also be extended to other urban developments in other Empires. How is this transformation traceable in literary texts and discourses? How is it also challenged by alternative forms of historiography mainly proposed by historical fictions, travelogues, essays, etc.?