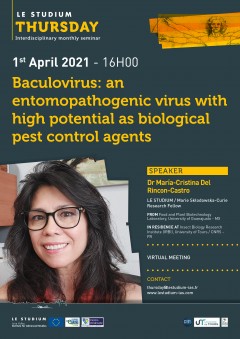 Currently, the use of chemical insecticides has increased considerably for the control of pest insects; however, the use of these products damages the environment and consumers' health. For these reasons, alternatives have been sought that are friendly to the environment and more effective against pests.
Baculoviruses are a group of entomopathogenic viruses, members of the Baculoviridae Family, which have double stranded DNA that fluctuates between 120 and 180 kb. They have stick-shaped viral particles and are occluded in a protein matrix (polyhedrin or granulin), forming the so-called occlusion bodies (OB's).
The baculoviruses are separated into two groups, the nucleopoliedrovirus (NPV) and the granulovirus (GV). Currently, these viruses are classified according to the phylogenetic relationships of their genomes and are grouped into four genera: Alfabaculovirus, Betabaculovirus, Gamabaculovirus and Deltabaculovirus. These are capable of causing natural epizootics in populations of the host insect. After these, they can persist in the soil for long periods of time; they are highly specific, restricting themselves to infect only arthropods and almost mostly insects. They do not cause residual problems in the system where they are applied, not cause contamination problems, nor do they cause harmful effects on insects that are not the original target.
For all these qualities, baculoviruses have the greatest potential as bioinsecticides compared to the other members of the viral families that attack insects