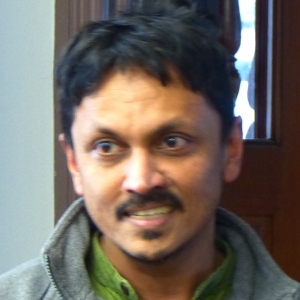 Department of Physics and Physical Oceanography, University of Newfoundland - CA

Macromolecular crowding: a physicist's perspective on understanding molecular motions in the complex environment of a living cell

The premise of this work is based on recent research that indicates that enzymes are physically propelled when they are catalyzing a reaction[1]. During the catalysis process, enzymes catalyze (i.e. greatly enhance the speed of) the transformation of “substrate” molecules into product species. Enzymes are seen to exhibit both chemotaxis and anti-chemotaxis[2], i.e., they exhibit motion either upward or downward, along or against the substrate concentration gradient. Follow-up work in groups in the USA[3], South Korea[4] and Spain[5] appear to confirm the observation, of enhanced motions, while other research suggests that this observation might simply be a fluorescence artifact[6]. We pursued (and continue to pursue) enzyme-nanoparticle attachment chemistry for multiple reasons: