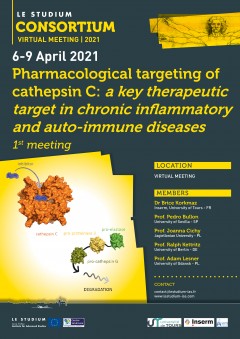 Cathepsin C (CatC), also known as dipeptidyl peptidase I, is a lysosomal amino peptidase belonging to the papain family of cysteine peptidases.  CatC catalyzes the cleavage of two residues from the N-termini of peptides and proteins. CatC, which is ubiquitously expressed in mammals is considered to be a major intracellular processing enzyme. The best well-known function of CatC is the activation of immune cell-associated serine proteinases such as neutrophil serine proteinases (NSPs). Neutrophil-associated local proteolysis is a common pathogenic phenomenon in chronic inflammatory or autoimmune diseases. Most extracellularly secreted proteinases occur as inactive zymogens and require activation. By contrast, NSPs elastase, proteinase 3, cathepsin G, and NSP4 are fully processed and are stored as active enzymes in granules of the regulated secretory pathway. Loss of function mutations in the CatC gene cause Papillon-Lefèvre syndrome (PLS) characterized by a severe pre-pubertal periodontitis and palmoplantar keratoderma without marked immunodeficiency. The lack of CatC activity results in an almost total elimination of NSPs in neutrophils from PLS patients. Moreover, PLS fibroblasts showed reduced growth rates and abnormal morphology with marked autophagic dysfunction. The main objective of the "Cathepsin C’s Five" consortium is to explore the pharmacological targeting of CatC in fundamental and translational research for drug development. To keep track and counterbalance unwanted effects of granule-associated serine proteinases amplified by CatC, we will evaluate new chemical inhibitors directly or indirectly targeting CatC in in vitro and in vivo experimental disease models. The proteinase-lowering drugs may be directly applicable to COPD, autoimmune vasculitis or psoriatic patients. These therapeutics may also be beneficial for patients with idiopathic pulmonary fibrosis by impairing the aberrant activation of fibroblasts.

14:30    The past, present and future of pharmacological targeting of cathepsin C (B. Korkmaz, France)

15:35    Implication of the cathepsin C in the Autophagy dysfunction (M. Cordero, Spain)

15:40    The role of the cathepsin C in pulmonary arterial remodeling (I. Borek, Austria)

14:20    The role of neutrophil serine proteases in inflammatory disorders of the pancreas (A. Aghdassi, Germany)

14:00    Neutrophil proteases as link between inflammation and lung adenocarcinoma: the proteinase 3 in the spotlight (AS. Lamort, Germany)

14:40    Novel chemical tools for monitoring activity of CatC and NSPs (A. Lesner, Poland)

15:20    Proteomics in disease investigation (M. Zoidakis and A. Vlahou, Greece)