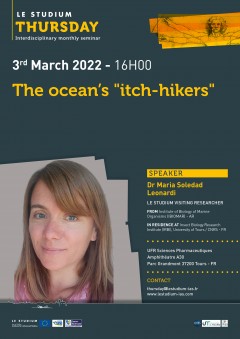 Insects are the most ecologically and evolutionary successful organisms on Earth in terms of biomass and biodiversity. They have virtually conquered any possible environment on our planet with a notable exception: the ocean. This absence of insects in the ocean and their infrequent presence in marine habitats contrast with their abundant occurrence on the mainland, giving origin to varied scientific hypotheses and speculation. Remarkably, a group of 13 species manages to endure long immersion periods in the open sea, as well as deep dives, i.e., seal lice. Sucking lice are ectoparasites of mammals, living while attached to the hosts’ skin, into their fur, or among their hairs. Among them, the family Echinophthiriidae is peculiar because it infests amphibious hosts, such as pinnipeds and otters, who make deep dives and spend from weeks to months in the open sea. During the evolutionary transition of pinnipeds from land to the ocean, seal lice had to manage the gradual change to an amphibian lifestyle along with their hosts, some of which may spend more than 80% of the time submerged and performing extreme dives, some beyond 2000 m under the surface. These obligate and permanent ectoparasites have adapted to cope with hypoxia, high salinity, low temperature, and, in particular, conditions of huge hydrostatic pressures. In this talk, I will describe some of these adaptations allowing seal lice to cope with their hosts’ amphibious habits and how they can help us understand why insects are so rare in the ocean.

Admission on presentation of the health pass.