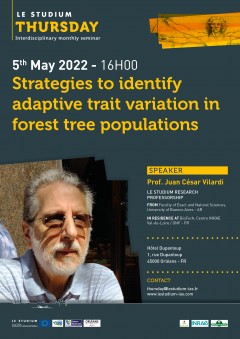 In a forest tree species, a trait is an observable and measurable characteristic of an individual. Trait variation in a natural population is a general feature in all living organisms and the analysis of this variation allowed to uncover universally accepted principles such and Mendel's laws and the occurrence of evolution. The identification of traits affecting the ability of individuals to survive and reproduce is a key objective in ecology, evolution and conservation biology. However, in many cases it is difficult to distinguish genetic from environmental contribution in determination of trait variation. Molecular markers, by contrast, detect variation at the genetic material (DNA) level. The availability of high numbers of molecular markers is an invaluable tool in many aspects, mainly those related to: differentiating demographic from adaptive patterns in the distribution of genetic variation among populations; identifying genomic regions related to traits (mapping). In forest tree species the analysis of annual growth rings accumulated in the trunk represents a particularly interesting model because they keep a historical record of the tree response to environmental variation. The joint analysis of molecular variation and annual ring features will contribute to identify targets of selection and predict the possible effects of global climate change in the structure of forest tree populations.