The music in the collegiate, later cathedral church of Our Lady in Antwerp (c. 1370 – 1530): a mirror of international prosperity? 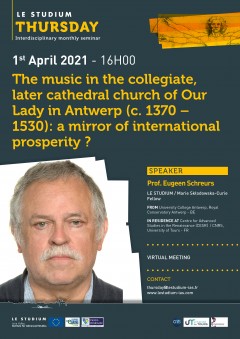 During the Ancien Régime, cathedrals and collegiate churches were the places par excellence where many European top musicians received a solid musical education. Especially during the long fifteenth and early sixteenth centuries, a large number of talented youngsters were trained professionally in the rich regions of Flanders, Brabant, Hainaut, Liège and neighbouring regions (e.g. Picardy, Holland, Utrecht). This is not entirely surprising since the Low Countries were one of the most urbanised areas in Europe and, as such, had a large  concentration of ecclesiastical institutions.

In addition, these institutions became very wealthy. Now that the cities had gained considerable power and a rich elite and a prosperous middle class had risen, many donated (sometimes large) sums of money and property to these churches. The aim was to be exempt from sins committed during life, in order to still reach heaven.

Since there was a 'surplus' of highly educated musicians in the Low Countries and the higher wages and interesting working conditions abroad were a special attraction, many skilled musicians moved to affluent courts in Italy, also including the papal court in Rome, or various European princely courts.  There they made a career and tried to obtain several lucrative church offices. Thanks to this network of travelling musicians, the related transmission of music and later music printing, there was an intense exchange of music. This contributed to an unprecedented international dynamic that resulted in music of an exceptionally high standard.

FROM: University College Antwerp, Royal Conservatory Antwerp - BE
IN RESIDENCE AT: Centre for Advanced Studies in the Renaissance (CESR)  / CNRS, University of Tours - FR