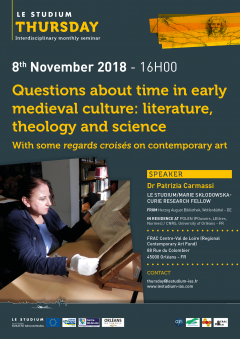 “Time” is a universal topic which is often referred to in art, music and literature, but which also puzzles scientists and physicists. The project deals with the different concepts of time which are to be found in early medieval sources from the 8th to the 12th century, focusing in particular on the fields of theological literature, liturgy and science. The research is based on manuscripts which are mostly preserved in Orléans and belong to the cultural heritage of the region Loire-Valley. An important cultural center in the region on which the work is focused was the Benedictine Abbey of Saint Benoît-sur-Loire, also known as Fleury, which was founded in the 7th century. The scriptorium of the monastery was flourishing in the 9th century, and a rich library existed there also in the centuries that followed.

With regard to the specific topic about time, the sources are considered not only in abstract terms, as regards their contents, but also in their historical context of production, circulation and use – as material objects, bearing in mind nota bene, marginal signs and glosses, images, diagrams, layout decisions and visual forms of displaying the text. Different layers and conceptions of time can be found in the early Middle Ages in Fleury. The subject was approached in several exegetical, liturgical or philosophical texts which were in the abbey, from Augustine to Bede and Isidor of Sevilla, but it also played an important role in historiography and hagiographical works which were produced by monks of the abbey. The research focuses on the following fields and their interactions: biblical and patristic doctrine on time, theological questions, time in the description of natural phenomena, liturgical dimensions of time, time structures in the daily life, reception and adaptation of classical sources, time and history.

Through this lecture, it will also be possible to explore in a virtual dialogue assonances and correspondences between medieval and contemporary art about the subject of time.