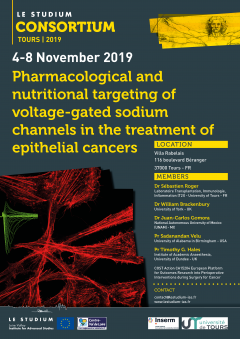 Voltage-gated sodium channels (NaV), composed of pore-forming alpha and auxiliary beta subunits, were characterized in excitable cells in which they are responsible for the triggering of action potentials. Their activity in nociceptive fibres is responsible for pain sensation. Recently, it appeared that these proteins are aberrantly expressed in non-excitable cancer tissues and cells from different epithelial origins such as breast, lung, prostate, colon, cervix, while they are not expressed in cognate non-cancer tissues. Their expression and function in carcinoma cells have been associated with cancer progression towards metastatic stages and patients’ death. The basal activity of NaV at the resting membrane potential of highly aggressive human carcinoma cells, controls intracellular signalling pathways that promote cell migration and invasiveness through extracellular matrices. The pharmacological inhibition of NaV with drugs that are clinically used, such as the antianginal ranolazine, the anticonvulsant phenytoin or the local anaesthetic lidocaine, reduces cancer cell invasion in vitro and metastatic colonization of organs in vivo. The supplementation of cancer cells with n-3 polyunsaturated fatty acids was also demonstrated to control the expression of NaV in cancer cells and to inhibit their invasiveness. The present collaborative project is a multidisciplinary project, joining concepts and techniques from cell biology, physiology, biophysics, medicinal chemistry, anaesthesia, surgery and oncology. This consortium aims at developing a better understanding of molecular and cellular mechanisms by which NaV channels (pore-forming and auxiliary subunits) are involved in cancer cell invasiveness and metastases development and at identifying whether they could serve as cancer markers and prognostic factors. It is also aimed at proposing NaV as new pharmacological and nutritional targets for anticancer treatments and for reducing cancer-associated pain.