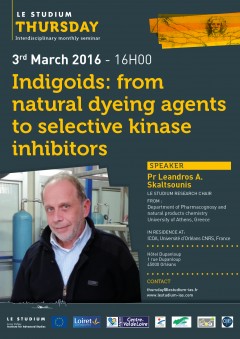 Indirubin, indigo and isoindigo are the core representatives of a rather small category of bisindole alkaloids referred to as indigoids. These compounds are the coloured constituents of the natural dyes Indigo and the famous molluscan Tyrian purple, used throughout the centuries for textile dying. In contrast with Indigo dyes, the major constituents of molluscan purple dyes are brominated indigoids. Nowadays, the use of natural dyes is very limited due to their replacement with cheaper synthetic dyes. Nevertheless, indigoids and especially indirubins have come to the timeliness due to the vast range of biological activities, which in many cases have their origin in traditional medicine.

Chronic myelotic leukemia has been treated from the traditional Chinese medicine with the recipe Danggui Longhui Wan, a mixture of 11 herbal medicines. Eventually, the antileukemic activity was attributed to indirubin, which was detected in the mixture as a minor constituent. During the following years, indirubin and its halogenated analogues were found to possess a vast range of biological effects in stem cells, cardiac, renal, and pancreatic cells, even in parasitic organisms. In addition, brominated indirubins have been utilized as tools for the exploration of neurodegeneration and cancer. In most of the cases, all of the above effects can be associated with the interaction of indirubins with important molecular targets such as members of the family of protein kinases, placing them among the most promising nature‐de rived drug candidates.