European Identity in Cinema in the Era of Mass Migration 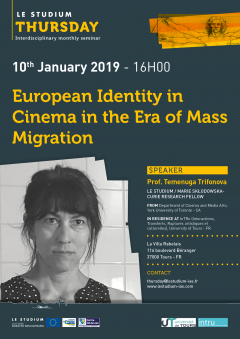 The migrant has become Europe’s new ‘Other.’ On one hand, the migrant has replaced the ‘classical Others’ of Europe, the Jews and the Roma, the two oldest minorities in Europe, who were viewed as ‘the Other within’ and associated with the East. On the other hand, however, the migrant has been celebrated as a symbol of 1) nomadic excess, 2) the ‘structural excess’ constitutive of law and morality, 3) a utopian figure representing the ‘third way’ between nationalism and supra-nationalism, a model for the new mobile subject of globalization. In this talk I will examine some of the dominant and representative ways in which European identity has been conceived in order to ask how recent European films featuring migrants and/or refugees solidify and/or contest actual and metaphorical borders within Europe, interrogate ethical and political borders, and contribute to philosophical thinking about Europe, European identity, and Europe’s core Enlightenment values. Although the extent to which different films frame migration and/or the refugee crisis as a socioeconomic, racial, or ethical issue may vary, I will argue that in contemporary European cinema it is becoming increasingly difficult to separate stories about migration from stories exploring life under the conditions of neoliberalism in general.

FROM: Department of Cinema and Media Arts, York University of Toronto - CA