Ethics, Law, and Anthropology in Bruno, Gentili, and the Sixteenth-Century Debate on Native Americans 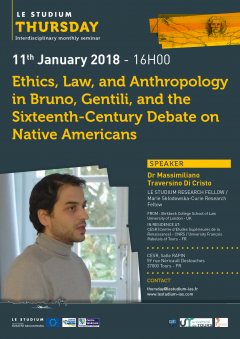 Throughout the twentieth century an impressive amount of scholarship has been devoted to late sixteenth-century discourse on power. As part of my research in Tours, I aim to discuss a subject, which, despite its broad relevance to studies on early modern era, has often been disregarded with respect to such a deliberation: the ethical, anthropological, and legal question implied in the European encounter with the 'New World'. This event spurred unprecedented debate. The European 'discovery' of America challenged religious convictions that had previously been considered irrefutable, inasmuch as it proved the existence of men who were clearly unknown to Christianity and entirely unaware of the Christian message. Yet, Europe 'discovered' not only the newness and unfamiliarity of America, but also—paradoxically—the contours of the world of its own knowledge. This moment constitutes a 'trauma' in the history of Western ideas, given the relationship between Christianity and the West as a 'fact of civilization' (Calasso), that is, as an element of cultural identity and an intimate key to understanding Western society—often through the interrelated discourse on religious and political spaces of action, which falls under the conceptual-historical narrative of Western ideas of sovereignty and absolutism.

With respect to such a topic, special, but not exclusive, attention is being paid to Giordano Bruno and Alberico Gentili, for the reason that these authors help us take a closer look at the doctrinal trends on Native Americans that are contemporary with both Renaissance and Reformation. Through their eyes, I aim to show the interrelation between the debate on Native Americans and a variety of sources, which span early-modern philosophy, cosmology, theology, and public and international law. In more general terms, by focusing on these topics I want to demonstrate the relevance of the debate on Native Americans to the subsequent evolution of Western discourse on power.

FROM : Birkbeck College School of Law University of London - UK