Coinage of 10th century Normandy: Prestige, Revenue and Administrative Challenge for the Duke 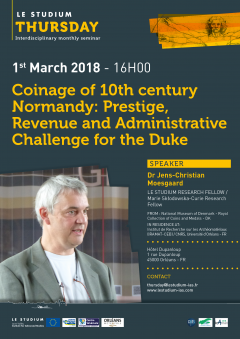 Coinage is a core society institution. Therefore the study of coins can provide new information on the organization of society. This is the more important when studying periods, such as the 10th century, where written sources are rare. The late 9th and 10th centuries mark the decline of the strong central power of the Carolingian rulers and the emergence of new local feudal powers. Was this development chaotic and violent – or smooth and well-organized? Our project takes a fresh look at this question through a case study of the coinage of dukes of Normandy who descended from the Viking invaders. The coinage appears to be much more well-organized than hitherto thought. The control of the coin motives, the circulation and the weight was tight. The metal analyses of the coins done by the host laboratory IRAMAT-CEB show that the silver content of the coins was firmly regulated. The amounts of coins issued turn out to big larger than hitherto thought. The duke used coins to spread his name. The compulsory exchange of coins provided income for the duke. This coinage is the reflection of a well-organized society far from a chaotic feudal anarchy.

FROM : National Museum of Denmark - Royal Collection of Coins and Medals - DK