The Children's '68: the international publishing scandal of The Little Red Schoolbook 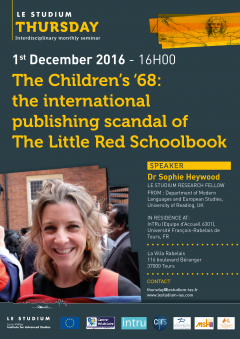 The global upheaval caused by the protest movements around 1968 revolutionised social structures, overturned cultural conventions, challenged political ideologies, and catalysed civil rights activism by women, gay people and ethnic minorities. Childhood historians stress the importance of this period in altering the authority structures that shaped children’s lives. This project analyses 1968 as a watershed moment in children’s culture and its related disciplines in comparative perspective across Europe. By thinking about children’s culture as a site for artistic and intellectual experimentation, at the centre of ideological activity across disciplinary boundaries and national borders, this project opens up new ways of understanding the 1968 liberation movements and their legacies. With the fiftieth anniversary of 1968 approaching, it is important that the children’s perspective is finally brought to the fore of scholarly debate and public commemorations.

This seminar paper will present an overview of the project and its key hypotheses, before exploring in more detail some of the themes and issues it raises through a case study of the international publishing scandal caused by the Danish manifesto for schoolchildren: The Little Red Schoolbook (1969).

FROM : Department of Modern Languages and European Studies, University of Reading, UK