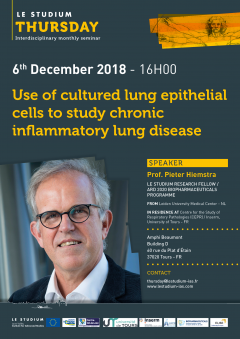 During breathing in (inhalation) and breathing out (exhalation) gas transverses the airways to allow gas exchange to occur in the air sacs (the alveoli). The airway and alveoli are lined with a special cell type, the epithelial cell. It is known that these cells serve an important protective function against inhaled pathogens (bacteria, viruses, fungi) and toxicants, and play a central role in inflammation and immunity. The function of these cells in patients with chronic lung diseases, such as chronic obstructive pulmonary disease (COPD), asthma and cystic fibrosis, is altered. Advanced culture techniques allow researchers to study the function of this cell type in detail, allowing controlled exposures to inhaled bacterial, viral and fungal pathogens, as well as cigarette smoke and air pollution. Furthermore, these cell cultures are extremely useful for identifying targets for novel therapies, as well as evaluation of efficacy of inhaled drugs.

Our studies in COPD have shown that cultured airway epithelial cells from patients with COPD have a decreased capacity to kill respiratory pathogens that are associated with infections in COPD. Furthermore, a single exposure of such cultured cells to cigarette smoke or diesel causes a further decrease in this so-called antimicrobial activity. We have found that this is explained at least in part by a lowered expression of so-called antimicrobial peptides (that can be viewed as endogenous antibiotics). In addition, these smoke and diesel exposures caused an increase in mediators that cause inflammation. Finally, repeated smoke exposure of these cultured cells resulted in changes in both the composition and function of the epithelial cells.

These studies support an important role of epithelial cell dysfunction in chronic lung disease, and unravelling mechanisms that underlie their altered function in disease provides novel targets for improved treatment.

IN RESIDENCE AT: Centre for the Study of Respiratory Pathologies (CEPR) / Inserm, University of Tours - FR