Severe malaria: what can we learn using experimental murine models? 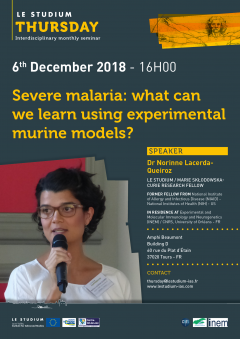 Malaria remains a major global health issue with millions of cases annually and half a million deaths, predominantly children under age five in sub-Saharan Africa. The disease is caused by the protozoan Plasmodium spp. and displays a spectrum of symptoms and complications, including cerebral malaria (CM), acute respiratory distress syndrome (ARDS), and severe anemia. The disease severity is determined by genetic and environmental factors as well as complex host-parasite interactions.

Experimental models of severe malaria are relevant to study some aspects of malaria-associated syndromes. Using rodent models of malaria-associated acute respiratory distress syndrome (MA-ARDS), we aim to characterize the interactions among endothelial cells, leukocytes and platelets in the lungs. In addition, we plan to examine the mechanisms of pulmonary damage during malaria in association with concomitant host comorbidities, such as anemia.

A deeper understanding of the complexity and heterogeneity of severe malaria complications is essential for the development of new therapeutic approaches.

IN RESIDENCE AT: Experimental and Molecular Immunology and Neurogenetics (INEM) / CNRS, University of Orléans - FR