On a neglected insect-borne disease, its vectors and the rational control of parasite transmission 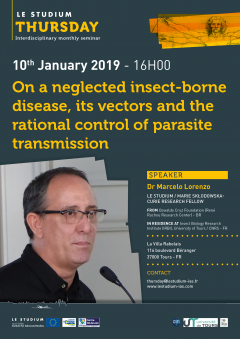 Insect-borne pathogens cause a dramatic impact on public health worldwide. A subset of them are part of the list of neglected diseases that normally affect large contingents of people in remote rural areas of poorly developed regions. A characteristic example is Chagas disease, a human illness caused by a parasite called Trypanosoma cruzi which fundamentally affects many rural populations through Latin America. When infecting humans, this parasite promotes a silent chronic infection which eventually develops into cardiac and digestive symptoms. Due to these reasons, Chagas disease kills thousands of people in an area that extends from Mexico to central Argentina. The pathogen is transmitted to people through the feces of blood-sucking insects called triatomines, or most commonly, kissing-bugs. As no vaccine is available for preventing transmission, current control programs rely on the application of insecticides. Nevertheless, the two main species transmitting T. cruzi have already developed insecticide-resistant populations that jeopardize efficient control. Therefore, new methods for controlling Chagas disease vector insects are needed to cope with these downsides of current control programs.

Modern pest-control methods rely on specific tools such as the manipulation of insect behavior and physiology. These allow restricting the use of insecticides and thus permit more sustainable and environmentally friendly control procedures. Our focus is to uncover critical aspects of vector insect behavior in order to facilitate developing specific pest control tools. Few cases will be covered here in order to exemplify the potential of behaviorally-based tools for the manipulation of pest-insect populations.