The Laity and the Bible in Early Modern Europe 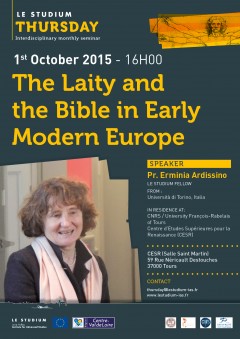 The role played by the Bible in early modern European history cannot be overestimated. It was the reference not only for religious practices and for spiritual life, but also determined political ideas, ethics, social and family behavior, professional rules and artistic production. By the 16th century the idea that a personal knowledge of the Scripture was essential for a Christian life moved translators to offer a version in the different vernacular languages of Europe. The invention of printing widely distributed them among communities, giving lay people the power of interpreting, discussing and forging a critical conscience that inspired most of the 16th century religious dissent and wars, but also the main conquest of modern society, such as tolerance,  and right of free thinking. Our project intends to reconstruct the possibilities or impossibilities of access for the laity to Biblical books. The case study is Italy, where the Bible was widely spread among laity in 15th and 16th centuries. The censorship decided by the Roman Church on Biblical translations determined some limits, but also the creation of new resources for approaching the sacred text.