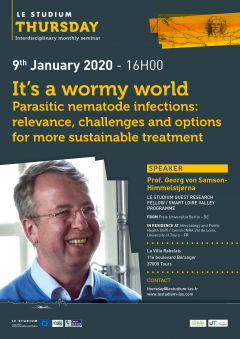 According to the WHO to date still approximately one quarter of the human population are at risk of acquiring worm infections, of which the so called ‘soil transmitted helminths’ are most prevalent. Amongst these parasitic nematodes such as Ascaris spp., hookworms and Trichuris spp., with together over one billion of annual cases globally, represent the majority of infections. In animals parasitic nematodes are a constant health threat in livestock as well as pet animals and several of these nematode species are also zoonotic. Thanks to the development of highly efficient and well tolerated anthelmintic drugs since the 1960s, previously devastating worm infections became controllable, which has saved and improved the live of billions and allowed to considerably intensify livestock production. However, similar as with antibiotic resistance also anthelmintic resistance (AR) has meanwhile become a widespread phenomenon, particularly but not exclusively in parasitic nematodes of livestock. While targeted-selective-treatment is a promising strategy for prevention of AR selection, due to the already widespread prevalence of AR also means for reversal of AR are needed. To this end an improved understanding of the complex molecular mechanisms of AR is a key challenge. Focusing on P-glycoproteins (Pgp), as the major transmembrane drug efflux effectors, work will be presented on the successful functional analysis of parasite derived Pgps in the model nematode Caenorhabditis elegans, which is hoped to lead to the establishment of a comprehensive Pgp-toolbox, enabling improved drug screening and identification of molecules leading to reversal of AR.