Gray matter, white matter, and the ongoing history of the distribution of mental functions 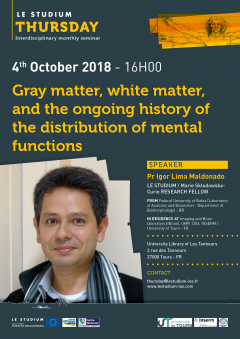 As soon as the human kind identified the encephalon as the seat of cognition, scientists try to understand how it works. Although the first signs of a neurological science date back to ancient times, the last fifty years have been particularly important, given the debates about the location of mental functions and the advances that have contributed to making cognitive neuroscience the discipline that we know today. The cerebral white matter gradually gained importance after the acknowledgment of the fasciculi that interconnect the cortical areas within the brain. Meticulous observations of disconnection syndromes have associated clinical manifestations with the respective anatomical elements, but such associations have not always seemed obvious because these bundles are not clearly identifiable.
This talk focuses on important methodological advances that have been responsible for the recent explosion in the amount of available data. Among the most important techniques are fiber dissection and diffusion imaging in humans. The knowledge of the form and function of fiber pathways supports the modeling of cognitive networks, the development of neurosurgical approaches and the interpretation of neuroimaging. We are living in an interesting moment in the history of neurosciences and humanity concept of the distribution of mental faculties. Neuroscientists, physicians, and the general public have moved from a localizationist cortical-centered model, which predominated in the last century, to a new connectivist one, in which our faculties are considered as the result of organized and interrelated neuronal circuits.

FROM: Federal University of Bahia (Laboratory of Anatomy and Dissection - Department of Biomorphology) - BR