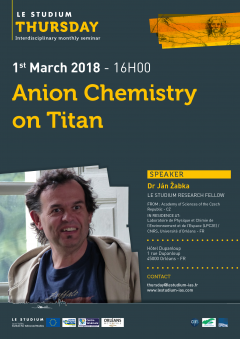 Ionospheres of planets and moons in the Solar System are unique and fascinating worlds which have always drawn people’s attention. For example Titan and Enceladus, two of Saturn’s satellites, are of major interest to scientific community. The Cassini-Huygens mission significantly expanded our knowledge of the Titan atmosphere [1] which might be similar to the prebiotic terrestrial atmosphere and would represent a frozen model of Earth. Nevertheless, the nature of the physical and chemical processes leading to formation of large organic molecules from small compounds present in the Titan atmosphere are not well known.

Recently, a mechanism has been proposed for the possible formation of these ions, in whith the cyanoacetylene, HC3N, played a key role [2]. Chemical ionization technique (NCI and APCI-) were used successfully to prepare model complex (HC3N)x.CyN- anions in the gas phase. The reaction itself and CID experiments was studied using a Waters Quattro Premier TM tandem quadruple mass spectrometer operating in negative ion mode and VG ZAB2-SEQ mass spectrometer. CID mass spectra of these anions, as well as their ion molecule reactions with HC3N support the previously proposed reaction scheme [2,3].

Presented experiments show that in spite of its low abundance in Titan atmosphere [4], the cyanoacetylene is probably one of the most important species in the ionospheric chemistry of Titan.

FROM : Academy of Sciences of the Czech Republic - CZ