Affective horizons of 'song' in the long fifteenth century

The relationship between music and emotions between the late 14th and early 16th centuries is a hot topic today, being approached by a steadily increasing number of scholars from diverse points of view. It is an era commonly understood to have witnessed the final flowering of 'medieval' music and literature, simultaneously with the proliferation of new, 'Renaissance' trends in learning and the arts; and it was a time of great ferment in the exploration of, and reflection on, emotions as they relate to musical expression and identity. Four specialists have been invited to guide a conversation that embraces different approaches to this rich topic of investigation, particularly as regards the idea and manifestations of 'song,' with its connections to vocality, literature, poetics, aesthetics, philosophy, music theory, and music analysis, and its relevance to both French and Italian environments. Readings will be made available beforehand, in order to maximize shared understandings and optimize discussions among the invited speakers, faculty, students, and public. 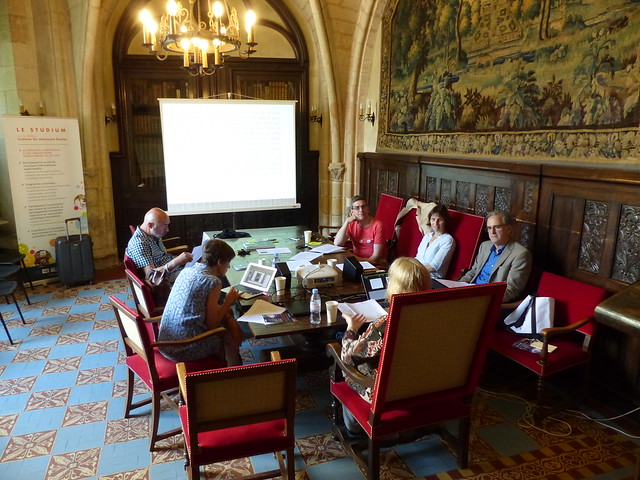 The conference venue is unique. Located right next to the basilica of St Martin in the old city centre of Tours, the Centre d'Études Supérieures de la Renaissance (Centre for Advanced Studies in the Renaissance) is a teaching and research institution which welcomes students and researchers seeking initial or supplementary instruction in all aspects of the Renaissance. The Centre was initially constituted in 1956 on the basis of a library and a documentary archive, supplemented by a collection of photographs and databases. It is now a venue for multi-disciplinary instruction, which, in association with the various Faculties of the University, has responsibility for teaching and research in History, History of Art, Literature, Languages, Musicology, and Philosophy. It currently leads a large research programme dedicated to the cultural regional heritage (Intelligence des Patrimoines). As a research centre it brings together fifty or so researchers committed to the investigation of the "civilization of the Renaissance" from Petrarch to Descartes. Participants will be welcomed in this exceptional surrounding blending Middle Age and Renaissance cultures and will have the opportunity to discover French cuisine and wines.

​This session will address visual and metaphorical representations of the act of singing, as found in the graphic arts and in literary and musical sources of the 'long 15th century.'  Our point of departure will be the representation of bodies (monstrous, hybrid, animal, and human) in 14th and 15th-century miniatures; we shall consider, from that perspective, the other arts, literary texts, and vocal compositions of the 16th century.
Our discussions will have a double objective:  images of vocality, on the one hand, and expression of emotions, on the other, according to their diverse contexts.  We shall be interested particularly in the different ways of representing bodies in the act of singing and their expressive vocality (harmony, dissonance, hocket, etc.).  From there, we shall consider the emotions that these images might be intended to convey to, and arouse in, period 'spectators' (and also those of today).
Our goal will be to discern 'affective typologies,' based on diverse visual and metaphorical forms of vocality, by situating them in their contexts of production and reception.  It will be interesting to examine the ways in which these classifications would represent the social expression of emotions, through the medium of singing (chant) and of song (chanson).
The more general goal is to consider interdisciplinary meeting points relative to song in the 14th to 16th centuries, considered as an aspect of historical and modern-day emotion studies.

​Emotional expression and emotional effects of music is a hotly debated issue in contemporary philosophy and psychology of music. There has been less debate in historical musicology, and it is not difficult to understand why: To reconstruct musical/emotional experiences of the past seems like an impossible task (it is very difficult even for modern empirical research). Nonetheless, the topic cannot be ignored; it is central for understanding European music history, and it will not do to treat it just as a chapter in the history of ideas.

In the three essays provided for the workshop, I have tried to specify several means of musical expression used in sacred and/or secular genres in the (“long”) fifteenth century: modality, timbre (height/depth), augmented/diminished intervals, “sublime simplicity” in text-setting, and so forth. In all three papers, I have concentrated mostly on “negative” or “low-spirited” affects. I did so for specific reasons: Music, especially polyphony, was generally experienced as “joyful” or even “lascivious” in the Late Middle Ages/Early Modern Era. To develop musical means to express sadness, melancholy, religious anxiety, mourning etc. would have been a challenge for composers and performers, and perhaps we can trace their compositional strategies more clearly because they would stand out as innovative and unusual. It is also very likely (if speculative) that expressive “subjectivity” is related more closely to “negative” affect: That the individual experiences and expresses him- or herself more directly if feeling in disharmony with the world at large.

Let it be pointed out that I do not think it possible to establish an expressive “vocabulary” (such as the notorious Baroque Figurenlehre) or to pinpoint the expressive means and emotional content of a fifteenth-century song exactly. This is hard enough with “Romantic” music. But we can at least have a try in discussing musical features that may be part of a historical system of expressivity.

In Tours, I would wish to review some or all of the songs dealt with in my paper “Tristre Plaisir. Die Stimme der Melancholie in der französischen Chanson des 15. Jahrhunderts”: Binchois’ “Tristre plaisir”, Josquin’s “Plaine de deuil” and La Rue’s “Pourquoy non”, and perhaps, if time suffices, one or two others. The aim is to revisit and refine my analytical arguments in that paper, and hopefully to reach some consensus concerning expressive means and ends in fifteenth-century song.

​In the letter ‘No melody is sweet without the sweetest friend,’ the Italian Renaissance philosopher Marsilio Ficino (1433-1499) expresses the belief that just as two different tones can resonate in harmony, so can the souls of two friends. This kind of harmonic relationships between friends, lovers, body and soul, and heaven and earth define the affective horizon of Ficino’s theory of music, and especially of song in his view of the good life. In this paper I demonstrate how and why Ficino made use of this metaphor, comparing the mind-body complex to two sympathetically vibrating strings on a musical instrument as he sought ways of conceptualising, diagnosing, and restoring discordant ‘passions of the soul’ into a well-tempered state of mind by carefully selected songs. In addition, by revisiting classical literature on the topic such as D.P. Walker’s Spiritual and Demonic Magic (1958), I will reflect on earlier attempts to reconstruct which kind of songs Ficino might have had in mind to heal individuals suffering from diseases such as melancholy and lovesickness. Last, I will the address the question of whether Ficino’s views on the cultivation of singing as an integral part of intellectual and spiritual exercise had a wider impact on Renaissance vocal culture.

​The links between musicians and poets are strong in the court of Burgundy, at the turning point of XVth and XVIth century, and music is, generally, in Rhetoriqueurs‘ works, the symbol of harmony and communication between this world and the other. An outstanding example is the beautiful palinod of marial ‘chant royal’ by Molinet portraying the Virgin as « Harpe rendant souveraine harmonie». But it is also the most efficient way of acting on passions. It is why music is deeply ambiguous, the muses are depicted as planets and lyre’s strings, but also as sirens, too sweet to be honest, too pleasant to not be dangerous. Music brings harmony and solace but also pleasure and obliviouvness towards duties and morality. It is this ambiguity of the representation of the power of music in Lemaire, Molinet, and Saint-Gelais’ works which will be our focus.

* only for the speakers